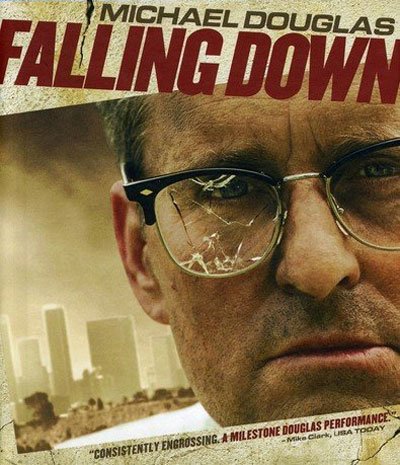 A man is falling down while he is stuck in early morning traffic. The cars don’t move, the air conditioning doesn’t work, and the atmosphere is stuffy.

In a fit of hysteria, he gets out of the car and leaves it in the middle of the road. This will be the start of a long day of madness.

Absolutely determined to return to his ex-wife’s house for his little girl’s birthday, relentlessly devastate everything in his path.

An almost retired policeman is the only one who senses a pattern in the trail of crimes he leaves behind.

Derided by colleagues and his boss, the man will have to save the day helped only by a young colleague.

An incredible metropolitan drama about the hidden madness of the common man.

A man without work and a family, gambling all out with nothing left to lose.

Michael Douglas is the sensational leading actor. Ironic and almost amazed by his own madness, finally free from society’s conventions and laws for a day.

Robert Duvall is also great as an old crafty cop. Tenacious and irreducible in his convictions until the inevitable final western-style duel against the madman.

Great direction by Joel Schumacher, underlining with sounds and attention for small details, the growing instability of the protagonist’s mind.

Falling Down is a human and tense thriller until the last minute. Absolute cult of the 90s, still working great today.