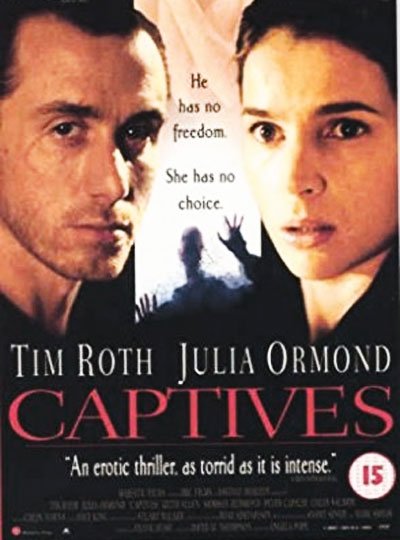 Captives begin with a prisoner is close go out on probation after many years in prison. During his final days, he becomes close to the beautiful prison dentist.

Secretly making love within the prison walls, becoming inseparable lovers even when he gets free daily permissions.

Just out of a bad relationship, the woman will be overwhelmed by the passion for the man.

But another inmate discovers their secret and asks the two something in return for his silence.

At that point, the two will struggle to survive against a dangerous gang of criminals and not be discovered by authorities.

Captives is an exciting crime romance in a prison environment, illuminated by the amazing performance of the two protagonists.

Tim Roth silent and introverted charming murderer, more forced by circumstances than by malice. Apparently physically weak, man will be able to bring out the ferocity for love.

Julia Ormond beautiful and lonely doctor, betrayed by the man she once loved and now distrustful of men. When she started the new relationship, she’ll become willing to do anything for her loved one.

The two actors make their passion real only with their looks, small gestures, and lightly touching each other during the medical examinations in prison.

An excellent romance directed by Angela Pope, cruelly realistic in staging and realism. But also a beautiful modern tale, where the beauty and the beast are both prisoners in their own way.

Captives is a wonderful romantic duet of the 90s, still striking the heart with intelligence and love.