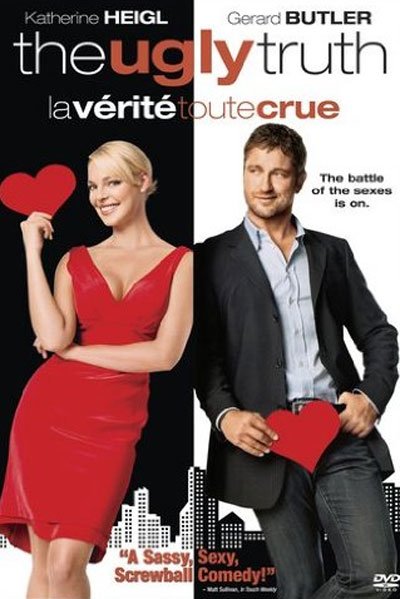 The Ugly Truth is the talk show where a television provocateur answers questions about sexual and sentimental nature problems.

A young producer makes a humiliating live call only to discover, next, that her network just hired the man.

Despite his vulgar and irritating ways to spite truth in other’s people’s faces, his ugly arguments increase the television channel’s share and the sponsors’ revenues.

By transforming romance people’s problems and turning them into comedy for everyone, the man immediately approaches his colleagues’ sympathy.

The woman initially resists trying to fire him, but then, convinced of his genuine and naive sincerity, becomes his friend.

She will then get advice on becoming sexier and more attractive to win over her charming new neighbor.

Romance comedy flowing soft between jokes and good feelings, however funny and with characters that intrigue until the end.

The Ugly Truth man-vs-woman sketches work nicely and are well developed even in secondary characters.

Characters like the man’s nephew where we also see him as a romance father figure, or the comedy’s embarrassing but irresistible attempts of the woman’s seduction, as beautiful as she is clumsy.

A relationship obviously destined to evolve with some romantic scenes and other more sexy and ironic moments.

Katherine Heigl and Gerard Butler have good chemistry as friends/enemies from the very beginning.

Robert Luketic wisely directs this genuine romance comedy, controlling the most vulgar moments and letting them free to bring their characters to life.