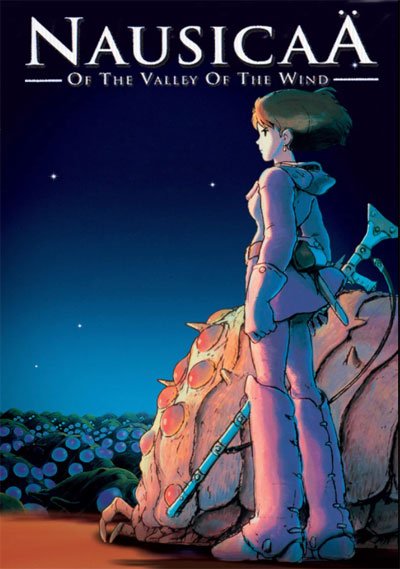 Nausicaä of the Valley of the Wind is a young warrior who grew up in a destroyed world and then reborn after a nuclear catastrophe.

In this future, nature has regained possession of the world. Years later the disaster, it is repopulated with fascinating and fearsome creatures ready to do anything to defend themselves.

Human beings are divided. Some try to adapt and live with the new ecosystem in respectful fear of nature’s dormant power.

Instead, others only crave wealth and power, aspiring to level forests by force and build cities again as once.

The sweet and sensitive Nausicaä will try to play her part in this conflict.

She lives helping the creatures and spirits of the forest. Also, with the same strength, the defenseless humans against animals cursed by a new and ferocious madness.

However, the war is beginning, between harmony with the green and the unconscious devastation of uncontrolled progress.

Indeed, one day a military aircraft crashes in the valley, carrying a threatening prototype of a war robot.

Finding herself amid a power feud, the protagonist and her colorful friends will be forced to choose and decide which faction to side.

Nausicaä of the Valley of the Wind is a beautiful fantasy / ecological fairy tale.

The master Miyazaki places it on his cinematographic canvas, where each frame is an inimitable brushstroke to form a more immense and superb work of art.

While trying not to show it, the protagonist is a skilled warrior suffering from her forced loneliness in being different.

The arrival of the mysterious aircraft will also bring a young soldier. A naive warrior who will open her heart, making her even more determined to defend life.

Living between human and supernatural existence, life for her is the forest, the animals, and friends and rivals that camp in small villages on the valley’s edge.

Miyazaki‘s style is a hymn to the right to exist of every creature, plant or human being in this world.

This great little story talks about love and war, arrogance and violence, nature against technology.

In short, the animals and plant designs move with mighty fierce beauty against the crawling rough mechanical weapons and vehicles of men.

Nausicaä of the Valley of the Wind is an inevitable film in every child’s growth.

With the rhythm of an enchanted poem, it helps form a conscious thought of respect and love for one’s neighbor.

It is definitely one of the best fight and love story among the majestic worlds of Hayao Miyazaki.