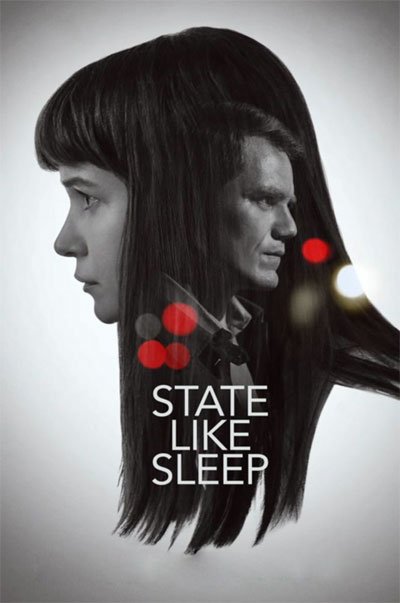 State Like Sleep begins with a husband who, after many years of an apparently happy marriage, committed suicide.

His wife trying to understand the reason for the gesture, she forthwith discovers a double life of him that she didn’t know existed.

Making its way through man’s untold secrets, the night begins to go in a private club and local swingers circle.

Here she meets a strange, mysterious man who perhaps has some answers to the tragic death of her husband.

Initially disgusted by his behavior, getting to know him better begins to have a relationship with him.

A personal drama for a complicated widow that always known world crumble upon her under a landslide of lies. The surreal mystery atmosphere is fascinating for this crime without murderers, but only victims.

A world made of small and stupid vices behind a normal couple’s facade. Changing faces at night in unknown places, finally free from normal social conventions.

Katherine Waterston excellently plays the protagonist. A woman who sees herself left alone to discover truths that no one wants to know.

In fact, friends and relatives abandoning her to his mourning, which she transforms into a night investigation.

At her side, the always exceptional Michael Shannon, a vicious man addicted to casual sex, brutally honest about men’s desires.

Indeed the only one who will stand while searching for a truth that perhaps does not exist. Anyway, giving the support and strength to continue despite everyone’s doubts.

State Like Sleep is a very feminine story, not surprisingly directed by a woman like Meredith Danluck. An excellent portrait of a fragile but obstinate woman and is uncertain of the futility of revealing her husband’s lies.