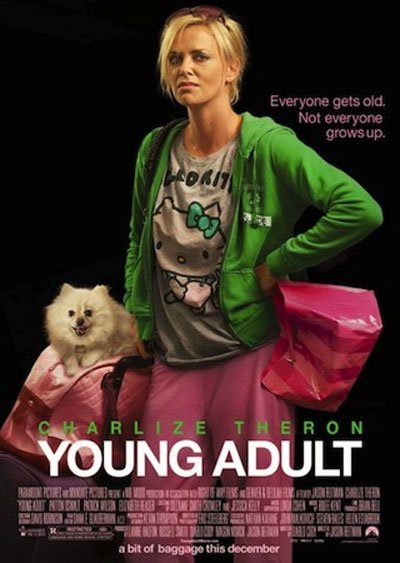 Young Adult stars a city woman returning to her hometown after knowing her ex-boyfriend finally married.

She left years ago because couldn’t stand the small, stuffy city atmosphere. Even more, she wanted to pursue her career as a children’s book writer.

The woman wants absolutely rebuilding her lost love with the man. He is always an obsessive pending business for her, who builds her books’ main character about him.

Thus she begins to reconnect her old contacts, introducing again to all the people she hasn’t seen for years.

Together with a cripple boy, the victim of an assault years before, they plan the seduction of her former-boyfriend.

But her drinking problems will bring down her feigned confidence. So, the strong woman will have to face her worst weaknesses in front of everyone once and for all.

Young Adult is a sweet and bitter mature comedy about the wrong growth of a woman. Unable to find direction in her life, she mentally still stopped in her adolescence.

Although she looks beautiful, intelligent, and has an excellent respected job, she also suffers from neurosis and loneliness.

Charlize Theron plays an extraordinary role, simple and complex at the same time.

Indeed, she initially appears like one of the many beautiful protagonists of an usual romantic comedy.

We slowly delve into her psychoses and insecurities, discovering her weaker and more lost than she appears to be.

The same goes for the funny character of Patton Oswalt. From the start, he also seems the usual comedy shoulder of the protagonist.

But he hides an atrocious personal drama that he never managed to overcome.

Together, they finally find something in common. A free ground where two outsiders can yet feel free from their lives’ weight, even if only for one night.

Instead, Patrick Wilson is the fascinating ex-boyfriend, who has always remained in the woman’s memory like a childhood obsession.

Together with his wife, Elizabeth Reaser, they struggle to understand the woman’s intentions, merely accepting her as someone they haven’t seen in a long time.

Jason Reitman directs one of the best American comedies of recent years.

Behind the entertainment’s facade, the director describes a woman on the verge of a nervous breakdown.

Ultimately this story is, in reality, a personal tragedy, cleverly disguised in a series of funny situations, with an unpredictable and stunning dramatic end.

It is, maybe, one of the many movies destined to disappear under the large number of comedies coming out every year.

For this reason, I would like to recommend it to all those who may never have gotten to know it and may have missed a small piece of genuine cinema from the last decade.