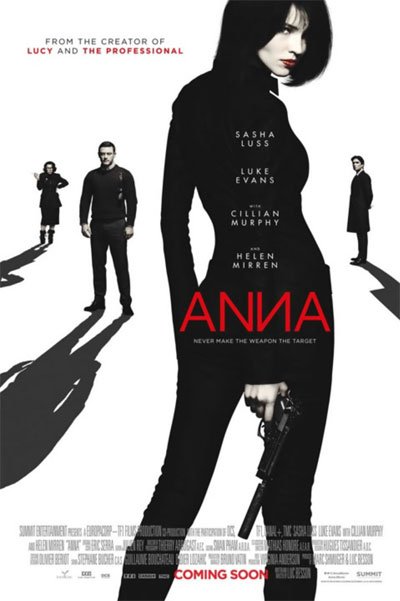 Anna is a poor girl with no future and a small and filthy criminal boyfriend.

The two live in squalor with petty thefts and drug dealing until one of their crimes ends in tragedy.

At that point, a man sent by the Russian government offers her a choice: die or become a spy.

She must face hard training and a trial of initiation to the impossible limit. By holding on and suffering, the girl succeeds in obtaining as a reward her first undercover assignments.

After many missions in which she demonstrates all her skills, the works become more critical and complex.

But one day, she remains stuck in a power game between some American agents and her compatriots’ colleagues.

Blackmailed by both sides, the beautiful spy will have to use all her intelligence and fighting skills. Playing in the shadow she must try to escape the two secret services’ crossfire.

Anna is an excellent female espionage with daring action scenes and a series of characters ready to screw each other at any moment.

The spies’ world is exaggerated like a comic book, therefore fun and enjoyable without a complicated plot.

Sasha Luss is a splendid protagonist, young and immature at the beginning, then becoming a ruthless war and deception machine.

The actress gets along strong and athletic in the numerous action scenes, and she is also elegant and sexy in her modeling cover job.

The two spies Luke Evans and Cillian Murphy, will fight for her love, helping or exploiting her according to their needs.

They also relentlessly work to resolve an old bloody dispute between the Russian and American governments.

Finally, the wise Helen Mirren will be her mentor, helping her become a spy. Initially skeptical, the elderly former spy will begin to see herself in the young girl.

Luc Besson returns to his beginnings with this near remake of La Femme Nikita.

This movie doesn’t get to its old film’s sweet intimacy, but it is still far above the quality level of many other directors doing action espionage.

The French director was perhaps looking for confirmation, after Lucy and Valerian and the City of a Thousand Planets commercial results.

Anna did not give the desired results, collecting as much as its production cost.

However, it is an excellent example of entertainment cinema done with an experienced cinematographic craft, as far as I’m concerned.

Although many criticize him, I continue to admire Besson‘s fantasy and always look forward to his new movie releasing.