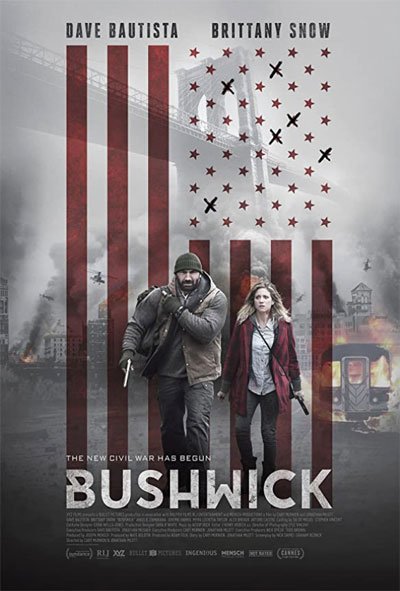 Bushwick begins with a day that seems like any other in New York.

A girl and her boyfriend are amiably walking out of the subway.

Suddenly, the whole neighborhood is under siege by a group of black dressed soldiers.

Saving herself by a miracle, she takes refuge in the house of a grim and silent caretaker.

The two have to move quickly, as the situation on the streets gets worse every moment.

So they set out together, desperately fighting in search of a safe place.

But there is no longer any safe place.

Indeed, they don’t know it yet, but some rebels have started a war for secession from the United States.

Their plan, however, went immediately wrong, and now the military is killing civilians without any mercy.

Abandoned to their own, New York citizens organize their army looking for weapons to fight back.

Bushwick is a heart-beating movie with a great cinematic technique at the service of fantastic action sequences.

The whole story is divided into large blocks following the characters without any interruption.

These blocks are joined together with some clever tricks to give the feeling of a continuous narrative flow.

The result is total identification with the protagonists in their odyssey through a devastated city.

The urban guerrilla, as well as spectacular, is also realistic and credible.

Indeed, some delirious scenes have rabbis armed with automatic rifles or young bikers throwing petrol bombs at the black-dressed mercenaries.

The city’s daily scenario and its particular inhabitants become an arena without rules where everyone tries to survive the day.

Dave Bautista and Brittany Snow against the world

He is a former medical soldier who has already taken part in the battle and does not let himself be impressed under enemy fire.

His sad past makes him a closed and lonely man, taciturn and determined to fight from the first moments.

Vice versa, she is an open and confident girl, slowly becoming an indomitable warrior during the long day.

Although upset by the events, her first thought go to the family.

Despite the soldier’s protests, she immediately starts searching for her elderly mother and the beloved sister.

By facing the enemies together, street after street and block after block, the couple is further helped/blackmailed by a petty criminals group.

Together with them, they organize the revolt to besiege the only park in the city from which it is possible to escape by helicopter.

A talented couple in directing

Jonathan Milott and Cary Murnion direct their second movie after the interesting Cooties, an horror action from 2014.

The couple confirms a great talent in the staging, realistic and credible, together with the ability to keep up the rhythm and tension.

The choice of making long sequence plans for their action scenes resembles that of the most famous John Wick movies.

A technique adopted not by chance, useful to better understand what happens on the screen and utilize the stuntman’s amazing skill.

Obviously, each of these scenes requires great organization and precision in coordinating the cast with the crew’s technicians.

Therefore, directing becomes essential to give a soul and an identity to a movie, otherwise reduced to a series of continuous breaks like an MTV music clip.

Bushwick has been a huge flop in cinemas, grossing almost zero money worldwide.

Even today, it is virtually unknown to the masses, despite being one of the best heart-beating movies of recent years.

So let’s bring it all together with the notoriety, talking about it and hoping that these two excellent directors will find another production with which to surprise us further.